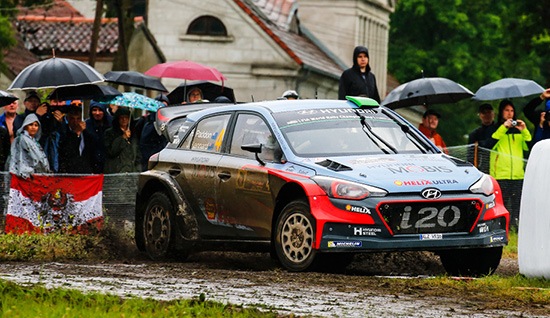 We’ve returned to the WRC podium in style following a spectacular wet finale to Rally Poland. Our Kiwis Hayden and John secured third position at the end of the rally but it was a tantalisingly close finish.

Thierry and Nicolas tackled the tough, slippery conditions to finish third in the Power Stage, taking an extra championship point. Our Belgians took a hard-fought fourth place overall, finishing less than one second behind Hayden and John.

“That was too close for comfort,” said a relieved Hayden at the end of the rally. “I struggled in the conditions this morning. The rain made the stages slippery and I had no confidence at all. We wanted to be relaxed, but I think we were probably too relaxed!”

This weekend’s top-three result means we have now taken five podium finishes as the WRC reaches the halfway point.

With two victories for the New Generation i20 WRC in Argentina and Sardinia, second place in Sweden and third positions in Monte-Carlo and Poland, it’s been a great start to 2016!

“Third is a great result and it’s fantastic to be back on the podium,” said Hayden. “A job well done by the team.”

Thierry agreed: “Finishing third and fourth gives us a nice points haul and it was definitely a nice bonus to pick up a Power Stage point.”

Our Belgian crew was among the quickest partnerships on the stages this weekend. They ended the rally only 3.1-seconds behind Ott Tanak in second. But after a tough opening loop on Friday, and in tough conditions on Sunday morning, it was a fine result.

“We tried to keep things smooth and clean, to bring the car home safely,” explained Thierry. “Our weekend was affected by our pace notes not being quite right on Friday morning. It was always going to be hard to regain that lost time. Other than that, we had the perfect weekend.”

A Disappointing end for Dani

Dani and Marc were looking good for a top-ten finish until disaster struck on the penultimate stage. The slippery terrain caused the Spaniards to made contact with a bank on SS20 (Baranowo), which caused terminal damage to their New Generation i20 WRC.

“It’s disappointing to get my first retirement of the season,” admitted Dani. “We just had no luck today. We hit some hay bales at the end of the morning loop. The mechanics did a great job to get us back out but the rain caught us out. I touched a bank about 3km into the Baranowo stage and we couldn’t continue the rally.”

As ever, our Spaniard looked at the positives!  “Not an ideal weekend for me, but it’s great for the team to get another podium and some important points.”

Our Team Principal Michel was encouraged by all areas of performance this weekend.

“It was never going to be an easy rally but we’ve had a good weekend,” he summarised. “The car, the drivers, the co-drivers and the team all did well.”

“As always, there are lessons to learn from the pressurised WRC competition. However, the pace of our New Generation i20 WRC is cause for encouragement on these fast stages. We can now look forward to another high-speed test in Finland.”