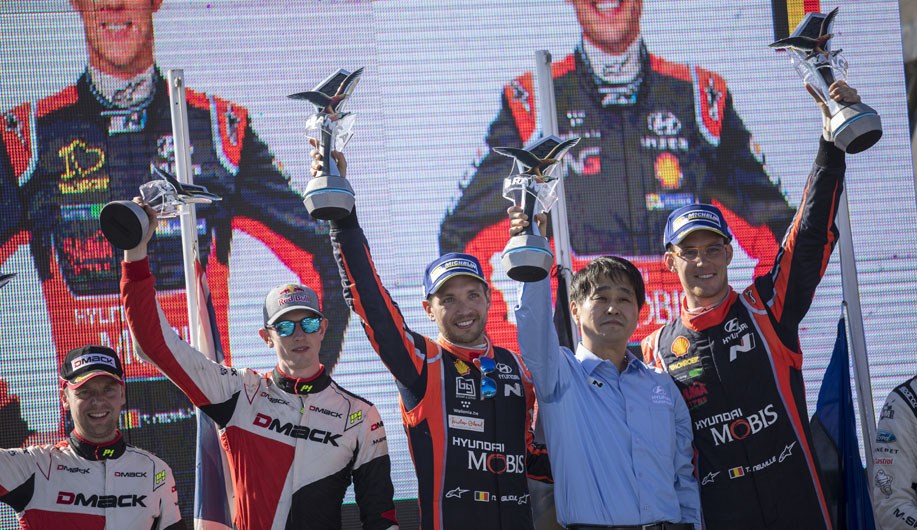 Thrilling win in Argentina! Thierry and Nicolas make it two in a row

We can always rely on Rally Argentina to create a thrilling finale and this year’s event certainly did not disappoint! In scenes reminiscent of last season’s event when Hayden and John claimed a stunning victory, the outcome of this year’s rally went right down to the Power Stage.

Our Belgians Thierry and Nicolas had been gaining on rally leader Elfyn Evans since Saturday morning. They moved to within 0.6-seconds after a sensational drive through Mina Clavero – Giulio Cesare, the penultimate stage of the rally. The scene was set for the ultimate showdown.

Two crews went head-to-head for glory in the El Condor Power Stage – and it was our #5 crew who came out on top by a fraction. Just 0.7 seconds split the top two. It was the third closest finish to the WRC event in history!

“I have never had such a nerve-wracking final few minutes of a rally in my career,” said an overwhelmed Thierry at stage-end. “It’s an amazing result and I’d like to say thanks to the whole team for everything they’ve done this weekend. Congratulations to Elfyn, who put up an incredible fight.”

The win marked our fifth ever in WRC and our second in a row, the first time we’ve achieved that feat. We’ve also become the first team to score repeat wins in 2017. A bumper haul of points means we’ve strengthened our grip on second in the Manufacturers’ Championship.

“A fittingly thrilling finale,” said our Team Principal Michel. “It is a victory we will all remember for a long time. To win by such a small margin after 360km of special stages is remarkable. We are very happy to become the first team to win twice this season.”

Down on their luck

It was a less positive end to the rally for Hayden and John, who experienced power steering issues in the final stage. Despite picking up their first stage wins of the year earlier in the weekend, their Rally Argentina came to a tough conclusion in sixth place.

“You could not have written a script more opposite to last year,” reflected Hayden. “I just can’t believe our luck. I didn’t have the feeling with the car in Sunday morning’s stages and we struggled to the finish. We’ll come back stronger.”

Dani and Marc also limped home after picking up a puncture while on fast pace in the Power Stage. It was a rally to forget for our Spaniards.

“A horrible weekend for us, which was over almost as soon as it had started,” lamented Dani. “When you lose so much time early on in an event, as we did, it is impossible to regain that. The puncture typified our luck this weekend. I want to look ahead to Portugal more positively.”