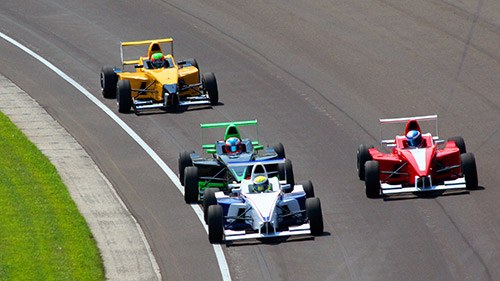 The Indianapolis 500 is an American tradition, having been held on or around the U.S. Memorial Day Weekend every year since its inception in 1911. With over a century of history, there is a lot to learn about the Indy 500, even for longtime racing fans. Here are a few fun facts about the Indy 500.

The biggest by far

The Indy 500 bills itself as the “Greatest Spectacle in Racing,” and while that claim may be open to debate, the Indianapolis Motor Speedway is inargueably the largest spectator sports venue in the world. With 235,000 permanent seats, plus infield seating that raises the capacity to approximately 400,000, its capacity puts every other sports venue to shame. The Roman Coliseum, Yankee Stadium, the White House, Vatican City, the Taj Mahal, the Rose Bowl and Churchill Downs could all fit inside the epic 253-acre oval, according to NewsDay.com.

One of the Indy 500’s most cherished traditions is drinking milk in Victory Lane after winning the prestigious race. But where did it come from?

According to USA Today, legendary driver Louis Meyer was the first to do it, requesting a bottle of buttermilk after winning the race in 1928, 1933 and 1936. An executive at the U.S. Milk Foundation saw a newspaper photo of Meyer’s unusual celebration and vowed to make sure it became a tradition. He succeeded—not only do victors still drink milk to this day, but it is also still used as a marketing opportunity for milk. You can actually see the milk preferences of various racers if you visit WinnersDrinkMilk.com, a website run by the American Dairy Association Indiana.

Of course, milk is not the only beverage consumed at the Indy 500. Research shows spectators consume nearly 91,000 litres of Coca-Cola products on race day, and approximately 550,000 litres of beer. The raceway is so large and has so many attendees that there are 29 bars dedicated solely to Bloody Marys and margaritas spread across the Indianapolis Motor Speedway. In other words, you are not likely to go thirsty on race day.

Women of the Indianapolis 500

Though Danica Patrick is the most popular and successful of the group, there have actually been a total of nine women to compete in the Indy 500. The first female driver to start the race was Janet Guthrie in 1977. Guthrie competed in three Indy 500s from 1977 to 1979, her best finish coming in 1978, when she placed ninth. The highest finishing position by any woman in the Indy 500 was third place, achieved by Danica Patrick in 2005. Indianapolis Motor Speedway offers lots of interesting information about women drivers on its website at https://indianapolismotorspeedway.com/events/indy500/history/women-drivers.

Back home again (and again) in Indiana

Another Indy 500 tradition is the singing of “Back Home Again in Indiana” before the race. From 1972 until his final rendition in 2014, the song was sung by actor Jim Nabors, best known for playing the character Gomer Pyle on “The Andy Griffith Show” and “Gomer Pyle, U.S.M.C.” Nabors got to know the song very well over the decades during which he sang it annually, but his first time did not go so smoothly. In 1972, Nabors was just a guest of track owner Tony Hulman, who asked him to sing the song mere moments before the opening ceremonies began. With no time to rehearse, Nabors had to write the lyrics on his hand.

With over 100 years of history and over 200,000 seats, the amount of facts and figures involving the Indianapolis 500 can be a little staggering.