In the span of seven days, Robert Wickens won his first race since his motorsports comeback, became a father—Wesley Joseph Wickens was born to Robert and his wife Karli this Friday—and flew back on race day to win once again at his home track. Without any practice or qualifying laps, Wickens drove from last place to the front, and the winning drive was completed by a defensive masterclass from his teammate and fellow Canadian, Mark Wilkins, in the closing laps.

Wilkins held off the charging No. 1 Elantra N TCR of Michael Lewis who claimed second on the podium with teammate Taylor Hagler. The final podium spot was claimed by Harry Gottsacker and Parker Chase in the No. 98 Elantra N TCR, who continue their run of good form and completed an all-Hyundai Elantra podium.

“In 20-odd years of racing, I don’t think I’ve ever entered a race without a single lap of practice—not even in karting,” said Robert Wickens. “This was a first. Mark and I were in constant communication throughout Friday, trying to make sure I knew what to expect—and that was before we knew if I was even coming to the race or not. I wanted to know how much brake pressure to apply, lift points, turn-in points, and I trusted Mark completely. I then used competitor’s braking points as references in the race. The car was on rails. Every time I think of my wife and new baby Wesley I glow.”

“It’s been an unbelievable couple of weeks for us,” said Mark Wilkins. “Watkins Glen was a surreal event for us, to finally break through after showing pace early on. Then we had all the excitement with Robert and the baby leading up to this, so we had to stay focused and that’s what we did. The car was awesome thanks to our engineer, and Robert did a great job behind the wheel.” 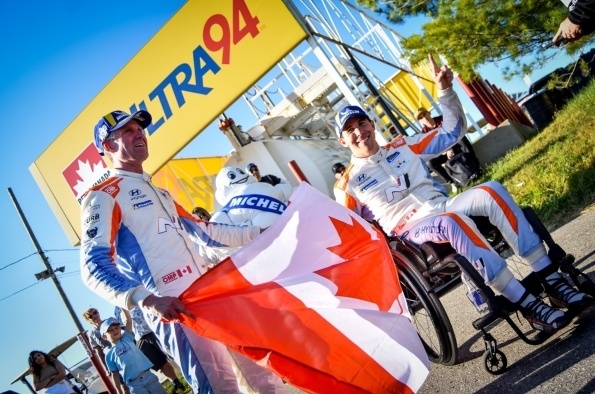