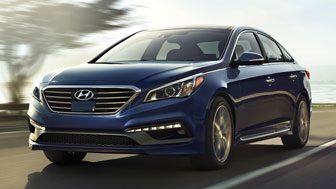 There’s plenty that’s new and exciting at Hyundai, including the launch of numerous new and significantly updated models, and the anticipation of several all-new models set to arrive later this year.  An all-new Genesis model line, all-new versions of the Tucson and the Elantra, as well as the upcoming new Hyundai Ioniq family are all creating plenty of buzz.

Find out more about the 2016 Hyundai Sonata on the Milton Hyundai website.

The all-new Hyundai Sonata launched last year, and it’s also creating plenty of buzz. Totally restyled, re-engineered and re-equipped, Hyundai’s latest family sedan was built to give models like the Toyota Camry, the Honda Accord and the Chevrolet Malibu a serious problem. From its starting price under $25,000, right up to the top-line, turbocharged 2.0T Ultimate Edition priced towards the high thirties, the Sonata seeks to build tremendous value and appeal into each and every one of its trim levels.

Here’s a look at how the new Hyundai Sonata hits over its weight in the mid-sized family sedan marketplace.

Structural Strength: Leveraging the cost benefits of being the world’s only automaker to produce their own steel, Hyundai engineers were able to build the all-new Sonata’s frame and body structure out of a high degree of Advanced High Strength Steel (AHSS). With the ability to create immensely strong and rigid structures that are simultaneously light and compact, the result is a car that’s lighter, stronger, stiffer, and safer than the competition. Sonata’s extreme-strength AHSS frame also benefits ride quality, handling and even noise levels. Its strength you’ll feel, every time you take the wheel.

Proven Safety: High Beam Assist. Autonomous Emergency Braking. Lane Departure Warning. A standard backup camera on every model. Lane Change Assist. The new Sonata is a rolling showcase of the very latest in affordable high-tech safety. In fact, it was even called a Top Safety Pick+ by the Insurance Institute for Highway Safety (IIHS), placing it amongst an elite group of the safest vehicles on the road today.

AJAC’s Best New Family Car: After back-to-back testing by a panel of Canada’s top auto experts, the Hyundai Sonata earned recognition as the Best New Family Car over $30,000, beating out competitors in key scoring areas and amassing the highest points count in its competitive set. A ‘Best New’ award from the AJAC is like a collective thumbs-up from dozens of Canada’s most experienced vehicle reviewers. 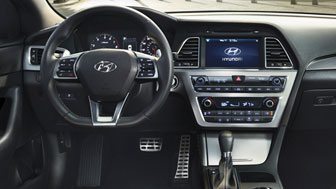 A Class-Up Cabin: Set on creating a cabin that truly exceeds expectations, the Sonata’s interior design team specified upscale trim materials, high-tech interfaces, and a smooth and soothing shape to the doors and dash that enhance its sense of space and relaxation. The Sonata’s cabin is cohesive, logically laid out, user friendly, and boasts a uniquely premium feel that is uncommon in the segment. Compare the competition, then drive the Sonata — you’ll find its upscale cabin truly stands apart from the rest.

Top Line Powertrain Tech: For an award-winning car, comes an award-winning engine lineup. The Sonata’s available Plug-In Hybrid powertrain recently became one of just three hybrid powertrains to be recognized with a place on the annual Wards 10 Best Engines list for 2016, with its smoothness, performance, efficiency and innovation helping secure its place. A standard hybrid model, as well as two gasoline engine options, are also available. Notably, the Sonata’s potent 2.0T turbocharged four-cylinder offers up pleasing performance and reduced fuel use, all with plenty of torque on demand. With four available powertrains offering top-line tech for performance and efficiency, the Sonata’s powertrain lineup has something for any shopper.

Find out more about the 2016 Hyundai Sonata on the Milton Hyundai website, or use the form below to book a test drive.